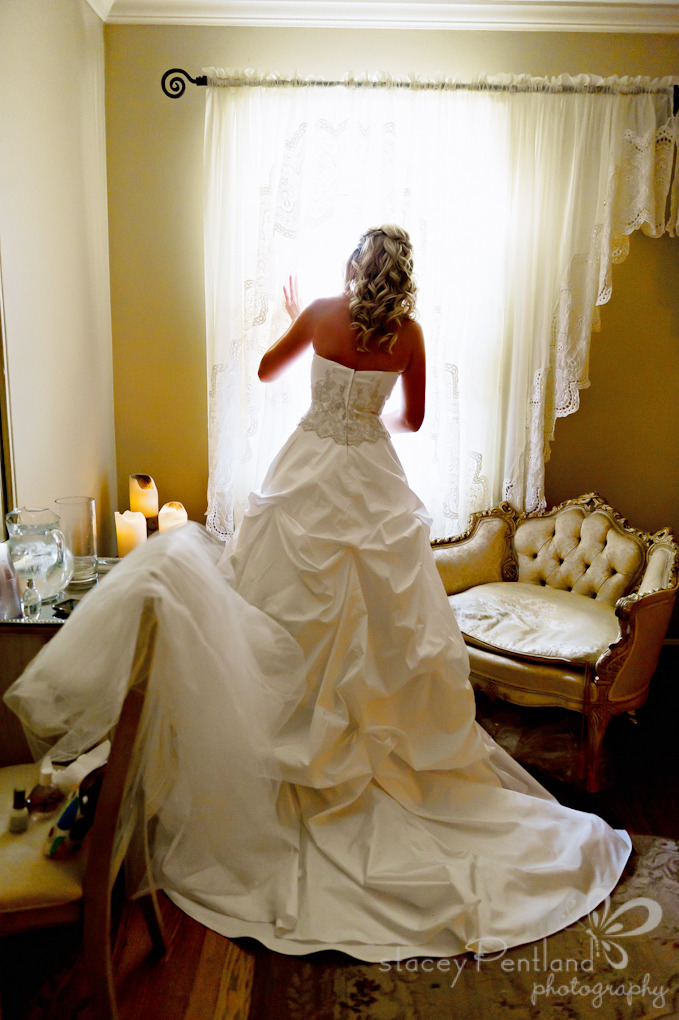 In typical fashion, I did not plan my time very well on the day of our wedding.  We were planning on having our dog, Kaylee, as one of our “flower girls”, so we scheduled to have her groomed that morning.  Well, a couple days before the wedding, we decided that it would be way to much of a hassle to have Kaylee in the wedding, so we put it out of our minds until the night before, when I realized that I still had to take her to the groomers in the morning, and it was too late to cancel because she had the very first appointment at 8AM.

So I ended up taking her to the groomers in the morning, and then rushing back home to wrap the table assignment cookies that I had stayed up until 3AM finishing.  Luckily I had my bridesmaid, Tiffany, stay up with me, or else I don’t think I would have ever been able to go to bed at all that night (the night before my wedding).  My hair appointment wasn’t until 12:30, so I figured I had enough time to finish wrapping the cookies and get all the stuff together to take to the venue.  Well, I don’t know how this happened, but I ended up not leaving for the venue until 12PM.  I had to drop off the cookies, my dress, and a few other nick nacks we were going to have displayed, and since everyone else was from out of town and didn’t know the area, I was the one that had to go.

Well, I ended up getting to my hair appointment about 45 minutes late, which set everything else back.  My mom was running late because she had taken my niece to get her nails done, and couldn’t leave her stranded at the nail salon in a strange city, so she had to wait for her to finish and then take her back to the hotel.  So when she finally arrived at the hair salon, I sent her running over to get her makeup done (which luckily was in the same shopping center as the hair salon), because we were already an hour late for that appointment.

When Maegan finished my hair (and she did a beautiful job, by the way), I rushed over to get my makeup done, and of course the girl worked at her normal speed, even though I told her I was in a huge rush and was going to be late for my own wedding.  I was really happy with the finished product of both my hair and makeup, so I guess it’s good that she took her time.

After my makeup was finally done, I had to run over to the groomers to pick up Kaylee, then drive like a maniac to get her home in record time.  Then I rushed  back to the hair salon to pick up my mom, whose hair looked gorgeous, by the way!  We finally arrived at the wedding venue an hour late.  Luckily we were only late for the rehearsal and some of the pictures, so it ended up being ok, thank goodness.

The first thing they did was get me into my dress since I was already late for pictures.

My mom helped zip me up, because that’s what mothers of the bride are for.

Then I put on my garters.  Well, actually, Elizabeth put them on me since I couldn’t see or reach under my huge dress.

Time to put on my jewelry.  I think I bought 4 different pairs of earrings before I decided on the ones I liked.

I wrote my vows on this purple construction paper while getting my hair done at the salon only about two hours before.  I know.  I’m a procrastinator.

Love this picture Stacey got of me looking into my compact.  I hadn’t eaten anything all day up until this point (it was about 4PM), so when we were trying to get this picture my hand kept shaking and I couldn’t hold the compact still.  Luckily she was able to get at least one good shot.

We took a couple pictures in the bridal room.  Cassidy looks so sweet holding my bouquet.

We miss you, dear one.

Mom and I sharing a private moment.

Love this one of the  back of my dress.   And the fact that my waist looks so small in this picture. 🙂

Each of us looking out our own window, waiting for the day to start.

We chose grey Calvin Klein suits for the guys.

Steve wore his wonderful smelling Miracle cologne.  Which Lancome doesn’t even make anymore!  So he has to use it sparingly.  I think our wedding qualifies as a worthy event.

Figuring out his tuxedo pants.  It’s a very rare day when Steve isn’t in jeans or shorts, so it was fun to see him all dressed up.

Chillin’ on the couch with his new father-in-law, my Daddy.

Steve helping his brother and best man, Paul, with his tricky tux buttons.

Love this picture of Steve’s nephew, Ethan, who was one of our ring bearers, looking up at his dad and uncle as they get ready.

What a little cutie pie!  He actually looks a lot like Steve, especially when Ethan was a baby!

Our three handsome ring bearers.  They actually got along really well for just meeting for the first time the day before.  Ethan, in the middle is Steve’s nephew, and the two boys on the outside, Max and Charlie, are my nephews.

Joking around while waiting for me to finish getting ready so we could start the pictures.

The next pictures will be of Steve’s and my first look.  We opted to take most of our pictures before the ceremony so it wouldn’t cut into our reception time, and I’m so glad we did it that way.

Franklin Wedding: Getting Ready for the Big Day